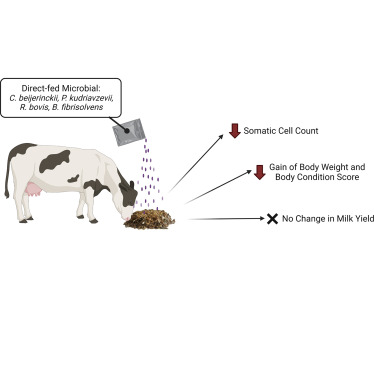 Open AccessPublished:October 27, 2022DOI:https://doi.org/10.3168/jdsc.2022-0250
The effect of supplementing native rumen microbes on milk production of dairy cows
Previous ArticleComparison of methods to homogenize ricotta cheese samples for total solids determination
Next ArticleEffect of partial exchange of lactose with fat in milk replacer on performance and blood metabolites of Holstein calves

We evaluated the effects of 2 direct-fed microbial (DFM) supplements containing 4 native rumen microorganisms on the production of dairy cows. Ninety Holstein cows (43% primiparous) were fed a common diet. Mean days in milk, milk yield, and body weight at the beginning of the study (mean ± standard deviation) were 92 ± 23 d, 45 ± 10 kg/d, and 659 ± 86 kg, respectively. After 14 d, they were blocked by parity, days in milk, and energy-corrected milk (ECM) per unit of metabolic body weight. Within block, cows were randomly assigned to treatments, which were top-dressed daily for the next 112 d. Treatments were 150 g of ground corn mixed with (1) no live DFM (CON), (2) 5 g of a live DFM (Galaxis 2.0; G2), and (3) 5 g of a live DFM (Galaxis 2.0 Plus; G2P). G2 and G2P were products of Native Microbials Inc. (San Diego, CA) and contained the same organisms but in different concentrations. Supplementation with DFM did not alter yield of total milk, protein, or fat, but slightly decreased body weight gain and body condition score gain with no difference between G2 and G2P. The DFM tended to decrease dry matter intake (DMI) and tended to improve ECM/DMI. The DFM did not alter digestibility of fiber, starch, or protein and did not alter concentrations of glucose or nonesterified fatty acids, but tended to decrease concentration of insulin in plasma. Direct-fed microbials decreased somatic cell counts in milk with no difference between G2 and G2P. In conclusion, supplementation with native DFM had little impact on animal production and efficiency.

Creative Commons Attribution (CC BY 4.0) |
How you can reuse