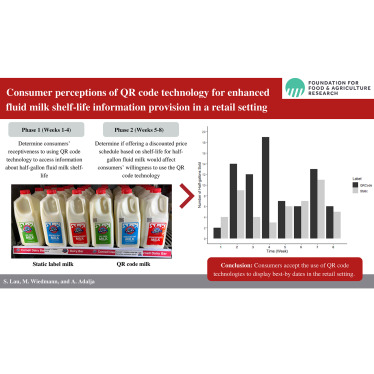 There is increasing awareness of the impact of food waste and the large role best-by or sell-by dates play in consumer food waste. To address this issue, predictive models have been developed that can not only provide more accurate best-by dates for fluid milk but could also be used to dynamically predict shelf-life (e.g., based on distribution data such as storage temperatures) and adjust prices for products closer to the end of shelf-life. However, limited information is available on strategies to communicate this type of information to consumers. Here we assessed the consumer acceptance of (1) quick response (QR) code technology to communicate product shelf-life and (2) shelf-life dependent pricing based on QR codes by offering both half-gallon fluid milk with traditional printed best-by dates and identical products with QR codes to convey best-by dates over an 8-wk time period in a retail setting. Overall, 62% of half-gallon containers sold over this time frame featured QR codes and 48% of QR code scans were linked to subsequent sales, suggesting the possibility of substantial consumer acceptance of novel technologies to display and communicate best-by dates. Preliminary data based on a small number of sales also showed that consumers did purchase QR code-labeled products offered at a reduced price due to limited remaining shelf-life. Our data suggest that at least some consumer segments would adopt QR code-based shelf-life labels, which presents an opportunity to better manage and communicate “best-by” dates and use dynamic pricing strategies to reduce food waste that occurs when an end-of-shelf-life product is either not sold or is discarded by consumers. Overall, QR codes represent a strategic opportunity for the dairy industry to achieve greater sustainability and to foster stronger connections with customers through enhanced provision of information that highlights sustainability practices implemented across the whole supply chain.

Environmental, social, and economic concerns have increased regarding food waste as nearly 1.3 billion tons of food have been reported to be lost or wasted globally every year (
Gustavsson et al., 2011
Global food losses and food waste-Extent, causes and prevention.
Food and Agriculture Organization of the United Nations, 2011
). Along the supply chain, the retail sector and consumers are estimated to be responsible for 31% of food waste (
Buzby et al., 2014

). Here, we refer to this as “food waste,” consistent with the Food and Agriculture Organization of the United Nations (FAO) definition of food waste as “the decrease in quantity or quality of food resulting from decisions and actions by retailers, food services, and consumers” (
FAO, 2019
The State of Food and Agriculture 2019. Moving forward on food loss and waste reduction.
Food and Agriculture Organization of the United Nations, 2019
; p. 5). In 2010, dairy products were estimated to contribute to approximately 25.4 billion pounds of food waste at retail and consumer levels in the United States, with fluid milk making up of 32% of the dairy product waste (
Buzby et al., 2014

This work was supported by the Foundation for Food and Agriculture Research, Washington, DC (M.W., grant number CA18-SS-0000000206), and by the New York State Dairy Promotion Advisory Board through the New York State Department of Agriculture and Markets (Albany). The authors thank the staff of the Cornell Dairy Bar and Aljoša Trmčić (for manuscript review and helpful discussions).
The authors have not stated any conflicts of interest.